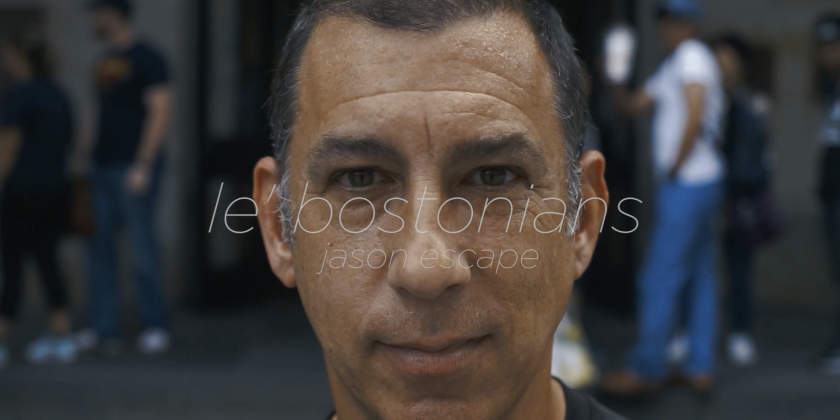 I moved to Boston from NY almost 2 years ago and it became my home pretty fast, this city is a proud one and I’m very proud to be part of it. I’m a resident of the beautiful North End neighborhood, the narrow streets, the amazing Italian food and the nostalgic alleys make my life a bit brighter, I love it. I’ve lived all over and have had many neighbors from all walks of life, artist, mechanics, lawyers, baristas, you name it, but Boston managed to provide me with my most interesting neighbor to date, Jason “Escape” Gardner.

I saw him the firs time on the elevator pushing a dolly with some thick steel tubes, a big speaker and a black pelican case, we said hi and parted ways. A few hours later I went out to run some errands and had to walk though Faneuil Hall, when I saw a bunch of people gathered paying attention to something or someone, I got close to the action so I could check out what was going on and I saw this man hanging at least 20 feet from the ground on a straitjacket, and with many feet of rope around him. The first thing I thought was, “that dude’s craaaazy”, and right on that moment he spun around and faced the crowd, that’s when I said, “Oh shit, that’s my neighbor!”. Yes, my neighbor Jason is an escape artist, he’s been at it for over 2 decades, he’s also a professional kick-ass drummer.

I saw him a few days later on the elevator again and I told him about seeing his show, and maybe shooting something. As a filmmaker you have this gut feeling about people, once I lock in some good eye contact with a possible subject I get this weird feeling and I need to know more. I kinda feel the depth of the story that needs to be captured and shared. This has happened to me 3 times in my career, my first time was with the comedian Wendi Starling, subject of my documentary “Funny Pains” (coming out in theaters on March 2018, woohoooo!).

Jason with the Blue Man Group at Faneuil Hall in front of hundreds of people.

Jason is a very unique person and artist, he’s pure heart and honest about who he is and what he does. We’ve just begun to find out more about him and what it means to be a true street performer. We’ve been looking for the right person to start our new web series “Le’ Bostonians”, where we showcase Boston’s own, people that make up the fabric of our great city, people that do what they love and in many ways make our lives better and happier.

The first episode of “Le’ Bostonians” is coming soon. In the meantime check out Episode ONE and TWO of our on-the-street series I Remember Like It Was Yesterday, New episodes every Tuesday!