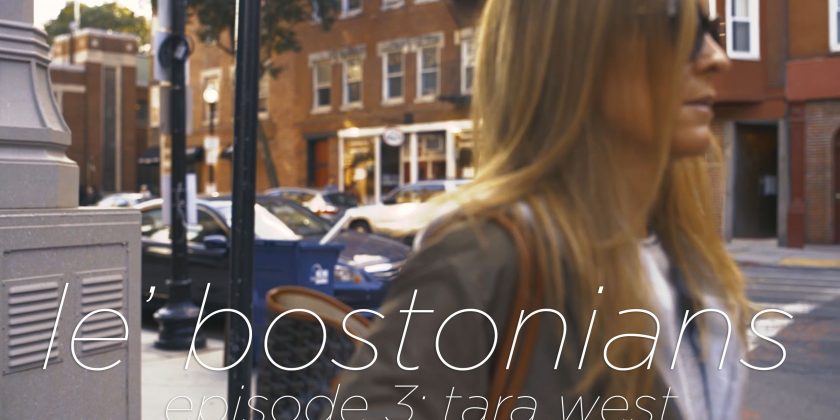 That’s a wrap on episode 3 of le’ bostonians!

We recently wrapped production on the latest episode of le’ bostonians with fashion stylist extraordinaire Tara West. In every episode is my goal to ‘peel the onion’ and find the core of the story, what moves them, what do they do what they do, and how did the get to where they are now. I’m learning more and more about how the past impacts directly the goals and dreams of people (including myself, of course) and how we all decide to deal with what happened in our childhood, teen years and so forth. This has been my biggest lesson, thinking about why I do what I do as well.

I’ve said it before many times on this blog, it is all in the eyes, it’s all there inviting you to dive in and go into someone’s life journey. With Tara it’s all there, but in the beginning you have to look hard, I felt that once she started to really trust me she let go more and more, but ultimately she made the choice to open up on her own, I could never try any directors tactics to get deeper into her story, she would have seen that coming a mile away,  I felt like she could read me pretty easy, she has that talent. I’m forever grateful for the invitation into her life. I think she could quickly tell that I really cared about her story and that I took it dead serious.

This story will be inspiring to many people, not only women but all people that have had to overcome a tragic and difficult childhood, people that have made themselves into successful human beings (whatever that means to you), that are constantly trying to be better at what they do and are honest with themselves. The only worry that I have with this piece is that I don’t think I was able to capture how hilarious this woman is, I Iaughed so much while shooting with her, she’s always joking around and I love that. Oh, and on a side note, she has decided to not watch the episode until its release during an event with 100+ people in November. That takes guts and at the same time, I’m honored that she’s trusting us so much.

She just won best fashion blog of Boston (for the second year in a row), which she celebrated with her children, but back in the day when she moved to Boston she was a family therapist and she had to overcome yet another unfortunate event in her life at that time, but her attitude towards dealing with this event is something to be in awe of, she talks briefly about it in the new teaser trailer.

Episode 3 of le’ bostonians with Tara comes your way on November 2017, in the meantime enjoy the new teaser trailer.